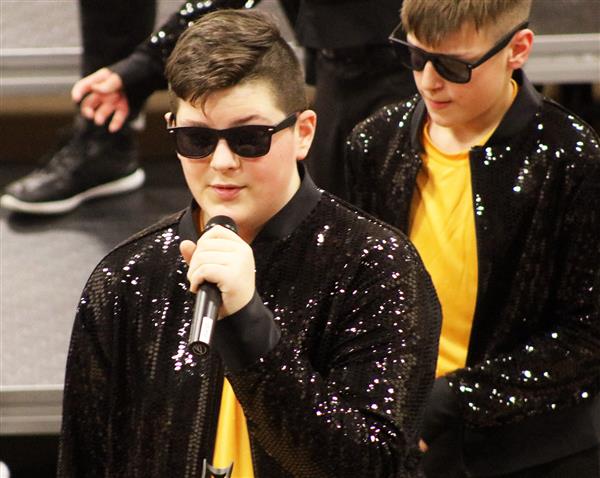 Cole Wendt, shown performing with the junior high schow choir, was selected for New Score as an incoming freshman.

Vocal music director Bryce Hesterman said that before the audition, students were given materials to prepare with via Canvas. Students were required to sing “My Country Tis of Thee” and were given another song to sing and dance with. There were also various help sessions in the evenings prior to auditions to help students learn the materials.

Hesterman said that at auditions, he is looking for vocal tone, precision, and evaluating how much they learned in a short amount of time.

“The biggest thing we’re looking for is potentiential, not perfection; no one is going to have a perfect audition,” said Hesterman.

“I was in disbelief because I didn’t think that anyone from eighth grade was going to get picked for New Score,” said Wendt. He added that he looks forward to performing with upperclassmen, and that New Score’s shows are always fun and exciting.

Another new member of New Score is freshman Ziek Barth-Fagan. As an incoming sophomore, Barth-Fagan was chosen as a dance captain. He said that it is his job to get the dances memorized quickly and help other members if they are struggling.

Junior Cassidy Polley has been participating in show choir since sixth grade. She added that this year, her audition was more stressful than in years past. She said that it felt like more pressure to get into New Score her senior year.

Hesterman added that despite the stress, students stepped up and performed. He said that in music, there is less room for error so it is important to him that students try their best and give it their all.

Polley is looking forward to show choir hopefully getting back to normal.

“I think if we have competitions again, it will pull the team together as a family,” she said.