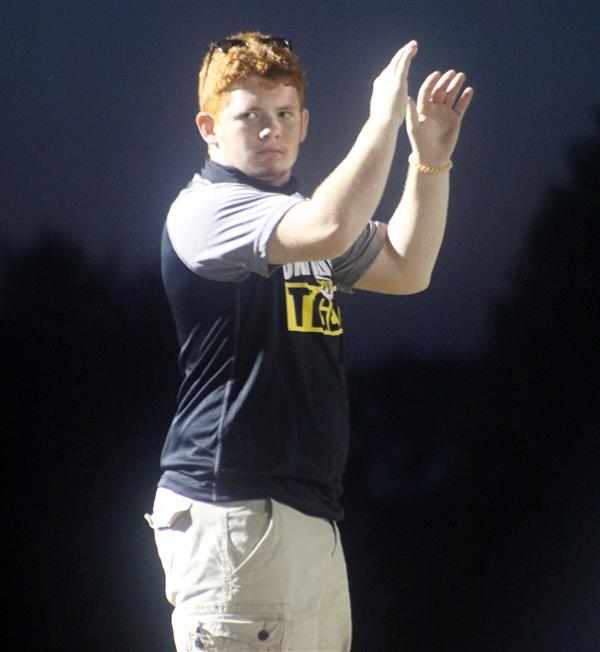 For senior Blake Osteen, it is all about taking one step at a time.

“There may be some obstacles you think you will not be able to overcome, but there is always the light at the other end of the tunnel. You just have to keep pushing towards your goals,” he said.

While Osteen was active on the Tigers baseball team and in wrestling, he put most of his effort and time into the band program at S-C. Having played in a band since fifth grade, Osteen found himself most comfortable with the bonds and lessons he learned playing instruments for the Smith-Cotton jazz, marching, concert, and pep bands.

He served as drum major during his senior year, along with S-C juniors Riley Wyatt and Lucy Mahalovich. Wyatt said Osteen is the fun person within the band, and knows when to have fun and when to be serious and get things done.

Through his time as the drum major, Osteen learned leadership skills and time management. He thinks that the drum major is relied on to lead the band efficiently and in a timely manner. Band members said he executed that position well.

“Blake leads by example,” Wyatt said, adding that he has seen Osteen mature in the time they have worked together. Wyatt said that when he started his band career at S-C, Osteen was a bit rambunctious but over time he has become a more mature leader.

Osteen has improved his instrumental skills throughout his seven years performing. He was the featured soloist in the S-C 2019 marching band show.

“Blake has grown as a leader and has developed as a player during his time with us,” said Smith-Cotton Director of Bands Grant Maledy. He added that Osteen is ready to take on any future door that opens for him.

In his years past high school, Osteen hopes to pursue a college degree in business administration or music education at the University of Central Missouri in Warrensburg.

Smith-Cotton Principal Wade Norton added that Osteen has grown like all students do and that Osteen is ready to take on the world.